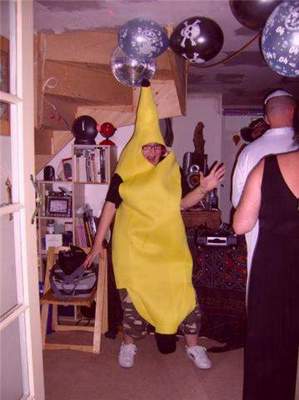 We’re not sure if this photo of Hooker Barbie was taken at a fancy dress party, or something more sinister. It could be some kind of religious initiation- note the gentleman in the skull cap to the right, who appears to be wearing the robes of a priest, and the lady in an evening dress who appears to be queuing up behind him. But for what? Maybe there is a virgin at the altar just out of picture awaiting her fate?

More disturbingly (if that’s possible), just under the jovial banana outfit, combat fatigues are clearly visible, suggesting some kind of allegiance to paramilitary groups- and now we’re thinking that the loose fitting banana outfit could actually conceal a suicide belt stuffed full of explosives, shortly to be detonated in the local marketplace, another example of the sectarianism that is rife in Scotland today. The yellow costume may not be as Sunni as it looks, or maybe I’m just talking Shi’ite…

Or maybe I’m just a sick puppy, and this photo was taken at an innocent party and I really need to get back to therapy. You decide. In the meantime, thanks to Hooker for sending in the photo of this lovely bunch of people, a worthy addition to Barry’s Gallery. Top banana!