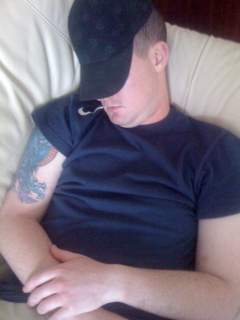 At first glance it looks like MC Check’s mum has lost about fifteen stone since we last saw her, but look a little closer and you’ll see that the tattoo in this picture is on the right arm, while Mrs Check’s British bulldog tattoo is on her left arm, as most of the sailors in Portsmouth can testify.

And although the baseball cap is drawn down over the face, hiding the trademark Check family teardrop tattoo under the left eye and neatly carved swastika in the centre of the forehead, tellingly the knuckles are absent of LOVE and HATE.

No, this isn’t old Mama Check, but her young son, our very own MC Check himself. It’s an easy mistake to make though, because the similarity between mother and son is striking, reminiscent of Biffa Bacon and his mother, from Viz. A handsome woman in her prime was Mrs Check, but sadly those days are but a long forgotten memory.

But her youthful spirit lives on, in young MC Check, who is pictured here after quaffing several bottles of Buckfast for breakfast, just before starting his shift down at the docks. Yes, he is following in his old ma’s footsteps, continuing the family tradition of servicing sailors’ needs, at prices even the poorest petty officer can afford. Not for nothing is the Check family motto “No seamen ever refused”

But we have to add that MC Check hasn’t always lived by the seaside, gulping down the salty air (amongst other things). No, he was born and bred in the ghetto of NW9, flashing complicated postcode handshakes to his brethren in the streets and back alleys of Wembley. Especially the back alleys. But with the rise in the number of eastern European hookers relentlessly being imported into the capital, and with the demise of the docks in London, the Check family took the decision to move away to the more profitable, but no less chavvy  estates of Portsmouth. And needless to say he fitted right in. Just like those sailors…

Poor old Check drowns the emotional, physical, and sexual pain of his chosen profession by downing bottle after bottle of the sickly sweet asbo juice, but on the bright side is now the new face of Buckfast- albeit one that will soon have George Best’s complexion and Alex Ferguson’s nose. Every cloud eh…? MC Check, we salute you! (as do the many naval officers that are his passing trade night after night after night…)