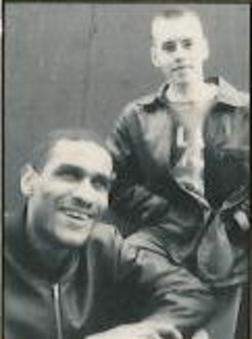 Always gotta big up DJ Krome and Mr Time- true legend of the scene and firm fave’s of your’s truly!!

By the time they got round to ripping up the rave scene in the early 90’s, Krome n Time were already seasoned veterans of the reggae sound system circuit. Although not as recognised as they should be, they are responsible for some of the most electrifying dance tunes of the early 1990’s….

Originally signed to legendary “Suburban Base” record label, their debut single was “The Sound of the Underground“, released in 1992. This was closely followed by “Manic Stampede“, which was remixed and sampled numerous times- deep dark and heavy, this ripped up many a dancefloor back in the early 90’s!!

My personal favourite of theirs, was released a year later- “The Slammer“. The enourmous break down of this tune was built around a sample of Nona Hendryx that was morphed beyond almost all recognition- “The dance that we’re dancing, now who’s in control”- and this was one of the first tunes of its kind to use sped up samples of female vocalists.

“Virtual Reality” followed shortly after, which was a much more ragga influenced sound, and (in my opinion) the start of their jungle/ragga tekno sound they later chose to follow…

soon after this release they started up their own record label (Tearin’ Vinyl) which showcased their penchant for all things jungle, with such tunes as “Licence” “Ganga Man” and “Studio 1 Lik”, to name but a couple

Krome and Time still perform at events such as Raindance, Moondance, and Bangface. If you get the chance, and they’re at an old skool event near you, check em out. Krome and Time, we salute you.