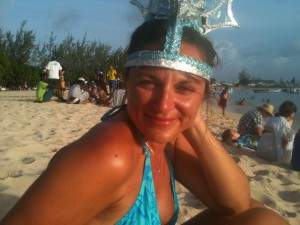 The bad weather of a few days ago seems to have passed, and for a third day in a row the sun is beating down on us. We’re on the beach, and predictably the girls are now moaning that it’s too hot, whereas a couple of days ago they were threatening to sue Barbados for bad weather. Women…

We had a bit of a lie in this morning after partying late into the night as the annual carnival climaxed. On our way out this morning we bumped into Paul, one half of the lovely couple that we are renting our cottage from. We got chatting, and to my surprise he told me that he lived in London around 1989, and was a regular at many London clubs and original M25 raves. He loves old skool acid house and dance music, and from the knowing look he gave me I’m pretty sure he partied as hard as the rest of us- old skool ravers in the Caribbean, how cool. I gave him copies of Barbados and Mandy, and in exchange he is going to make me copy of a CD of a local star who he knows. At this rate trance will be out of the window and I’ll be able to play a full set of soca! I’m going to tell him more about Muck FM before we leave, and maybe our listener base will extend to Barbados too. Soon we’ll be more globally known than Microsoft…

Yesterday we were back down at Brighton beach, where the carnival parade finished and the parties started. Couldn’t be anywhere else could it! Thankfully we didn’t bump into the penis in a sock guy this time, and with the sun shining and party rocking it was hard to believe that this was the same place that we got soaked to the skin a couple of weeks ago, alone under leaden skies.

Huge sound systems in the street were pumping out soca, reggae and calypso, and the ganja and rum were flowing freely. Those not in costume were dolled up to the nines, the boys styling it on the side of the road checking out the girls as they bogled past.

I wore my “bananas not guns” t-shirt, with a cartoon picture on the front of a hand holding a banana like a gun. Mrs Muck memorably told me she didn’t like it when I first bought it, and scoffed when I replied that it was the type of t-shirt that people comment on. The first time I wore it three people told me it was wicked, and the second time I wore it someone begged me to sell it to them. As you can imagine, I’ve never let Mrs Muck forget it.

Well, yesterday I had hardly got the camcorder out of it’s case and started filming a delicious carnival honey dancing in the parade, when she stopped dancing, told me she loved my t-shirt and demanded to take a photo of me. Ha ha Mrs Muck, in your face! It reminds me of one of my favourite moments from The Simpsons, when Lisa is gloating about something. Marge tells Lisa that no one likes a gloater, do they Homer? Homer agrees and Marge turns back  to Lisa and gloats “seeeee Lisa? Seeeee!”

The parade was fantastic, the costumes amazing, and the girls sexy as hell. We saw so much bogling that at one stage I really thought I’d died and gone to heaven. I have added the Barbados carnival to the list of requirements for paradise, along with the obvious girls, drugs and trance (with extra girls please).

Floats with huge stacks of speakers were arriving from across the island, and all you could hear for miles around was bassline pumping out of a thousand speakers. There is nothing quite like standing in front of a huge speaker, out of your face, with bassline shaking you to your soul. Soca reminds me so much of the genres of music I love. It’s fast, dirty, hectic, and has a rumbling bassline to die for. It’s like the hard house of reggae, and as I’ve got a feeling it’s around the same BPM I may try mixing them together back home. I’ve picked up some more CDs to bring back to the UK, and will definitely play a few on air.
By the end of the evening Mrs Muck and myself were bogling and whining our battarms alongside the locals, and our love for soca was complete. My knees nearly gave way trying to “guh down” limbo style behind the girls, and my legs are aching like a bastard today.

Other highlights of the day include the policeman trying to remain nonchalant as a girl bogled in front of him, grinding into his crotch (footage available), and the guy who was so drunk that he was touching up all the dancers and getting very close to being beaten up. As we watched, he then sat down on a bank of grass facing a food tent, whopped his cock out and pissed in the air in front of all the families eating their rice and peas. The best bit though is that a couple of minutes later he sneaked up on Mrs Muck and started dancing with her, his piss covered hands all over her. Suffice to say I found it funnier than Mrs Muck…

To balance things up though, I’ll have to mention the moment that a guy asked me to take a photo of him and his girlfriend and handed me his phone. I failed to realise that I was holding the phone facing the wrong way, and took a fantastic photo of myself much to the mirth of everyone around. Mrs Muck’s guffaws could be heard the loudest though. All disclaimers apply, as always.

We ate some amazing grilled tuna at a cafe on the roadside, and a young lad of around twelve years old was spinning the tunes, mixing with Virtual DJ on the laptop. It was wicked to see someone that young with a real passion for music, and his selection of tunes was fantastic. I chatted to him, and gave him a copy of my Barbados CD as we left. Bless him, it made his night, although what he’ll think of trance I don’t know. Maybe it will be the seed that introduces a love of house music to him alongside Caribbean tunes. My work here is done…

The weather was fantastic too on Sunday for our catamaran cruise. We had a great day, snorkelling over shipwrecks and coral reefs, and swimming with turtles. I slapped one on the rump as it swam past me. Firm.
We had a lovely lunch and a few rum punches before heading back into port. We decided not to go out after all on Sunday evening, and partied at home instead, with the soca blaring out of the radio, and me and Mrs Muck getting wasted on homemade rum punches. I vaguely remember bogling around the mango tree, and then waking up on Monday morning with a headache.

Which reminds me, it’s nearly time for happy hour at the Coconut Court so I’d better get going! Only three days our holiday left (gutted) and we have vowed to party hard at every opportunity. We’re heading to St Lawrence Gap tonight, for another bogling session. I’m still aching from yesterday and I hope my poor legs hold out this evening. Like Shakira, my hips don’t lie. The only difference is mine will need replacing soon.