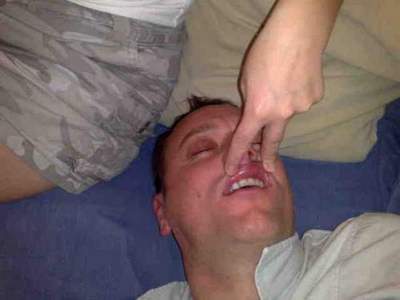 To be honest, this photo tells more than a thousand words ever could, but it would be rude of me not to mention a little about our friend here. To protect his identity, we have changed his name, and for now let’s just call him Barry. Most people do.

This photo was taken five minutes after Barry downed a can of Shandy Bass for a dare. It was always going to end in tears. Tears of laughter for everyone else in the room.

But Barry’s a good sport, and gave his consent to us using this photo. The subsequent snaps of the nurses pumping his stomach in casualty have been locked away in the Muck vaults for later use, blackmail and general merriment.