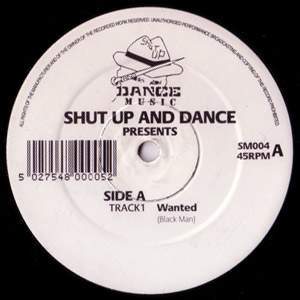 Shut Up And Dance

If one crew represented the original spirit of rave culture, it was Stoke Newington’s Shut Up And Dance (from herein reffered to as SUAD).

For those of you not from the South/London etc (I’m lookin at you Ms Hoppy and Sub Bass lol), Stoke Newington is a pretty shitty part of NE london… not that it matters, but I like to “set a scene”…

Before rave fractionalised into all its sub genre’s, SUAD threw together house beats, techno squiggly bits, hip-hop breaks, cockney slang raps, ragga patois, and incredibly cheeky (and normally un-copyrighted) samples, to create a sound that was fresh and unique to its time…

If Drum n Bass is current man, then SUAD is its Old-skool Neanderthal ancestor- old, no doubt. But a blueprint of times to come…..

Enough of me waffling.

SUAD kept themselves busy throughout 1989, releasing-

(The 10 pound remix), which parodied they’re previous hit (….nah mon, dis’ a dee remix!!) they not only became known across the whole rave scene, but even hit the UK charts (fair enough only the top 60, but hey!)

They followed up “£20…” within weeks of its release, with-

….which rode a scandalously large portion of Eurythmics “Sweet Dreams” into the UK Top 50. By this time SUAD were gaining UK wide recognition…

1990 was another busy year for SUAD, who by now had the Midas touch. It was around this time they hooked up with a couple of likely local lads…..the irrepresable “Ragga Twins” (2 MC’s from NE London), with roots in the Reggae dance hall scene, who also made the switch to the rave scene….

In this year they released-

Combined as an “awesome foursome”, their “Reggae Owes Me Money” album reached #26 in the UK charts, and copies of this were limited….

….It was on this album that SUAD explored their “Dub” influence, on tracks like-

At the end of 1990, SUAD released their first album-

This featured the insanely paranoid-

…..which is like a bad come down in Brixton- scary, deep and twisted, its like dancing a jig on the edge of the apocalypse…

Compare this to the like’s of “5,6,7,8”, and you can see SUAD were quickly evolving towards the dark side- The Jungle, the nasty business….. also feat on this album was-

….which pre-dated the strings n funk style of da Wu-Tang-Clan, by a good few years

If you were listening to pirate radio around this time, this tune would have been on many a TDK of your’s lol-

SUAD’s biggest success came with this-

…..unfortunately, it was their biggest tune that ultimately led to their un-timely demise……

Their “cavalier” apprach to sampling finally caught up with them, and Mark Cohn (the US singer of the original tune “walking in Memphis”) sued SUAD for rippin off his lyrics, and was eventually awarded all the profits from the sales of that record……………………

…………………..SUAD were officially declared bankrupt in 1993, and have struggled ever since.

SUAD- We Salute You!

1 thought on “Shut Up And Dance”