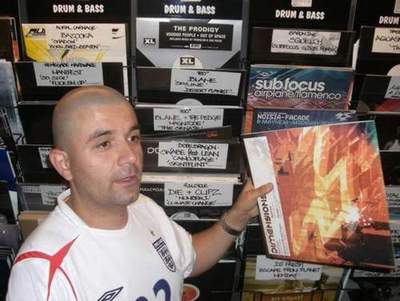 Ok, time for another spotlight on…..

Ever been to a One Nation event? Do you remember the Paradise Club in Islington? Have you ever raved at Roast, Thunder and Joy, Labyrinth, Jungle Splash or Telepathy? Hell- have you ever been to a Jungle rave??!!!!

Nicky Blackmarket is one of the original pioneers of drum and bass, and he is still the most faithful soldier for the scene around the world. Anyone who has ever been into the rave/jungle/DnB scene will know this man. The term “Legend” doesn’t begin to describe his impact on the scene

His early influences came from his mother’s (Mrs Blackmarket??) background in the jazz scene, and it is his improvisation and variety that have characterised his DJ performances throughout his long spanning career.

At the start of the eighties, Nicky was a young teenager playing electro hip-hop at youth clubs in London. He played with long-time collaborator DJ Clarky and together they began to mix all forms of dance music, at house parties and on pirate radio.

Friends FM, run by Mad B, gave Nicky a good education and the momentum to start his own shop in Londons Soho, the legendary “Blackmarket Records”.

BlackMarket Records (BMR) was (and still is) a wikkid little store, with friendly staff (Ash-atak, Pascal, Ray Keith, MC Foxy and more have all worked there at some point), and going record shopping on a Saturday was a high-light for many (including myself and Dr Muck

Often you’d bump into the likes of Shabba, MC iC3, MC Moose and more, just hanging out by the counter…… Good times!!

In 1992, as the house scene moved towards breakbeat, Nicky created a separate department downstairs to cater for the sound that would eventually be called Drum and Bass.

In the mid-nineties, Nicky pushed the hardcore scene with a regular show on Pulse FM and performances at the Roller Express in Londons Edmonton. He then moved into production, making his first record “Spam EP”, along with various remixes and releases on his label Gyroscope, with artists like Ray Keith.

These tunes smashed the UK old skool rave world to bits, and this exposure fueled Nicky’s DJ career. Nicky thus decided to put all his efforts into playing his music around the world.

As the jungle scene as a whole exploded, Nicky formed his legendary partnership with the late, great Stevie Hyper D (RIP)

…..These 2 links are just a snippet of their performances which spanned most of the mid 90’s, and their efforts are still regarded as the standard by which all others are judged…. mp3s of those sets will probably be on the internet forever.

Nicky Black was a regular on Kool FM, regularly smashing it up with the likes of Probe, Profile, and Andy C, to name but a few…….

Blackmarket Records (the shop) supported the scene as a focus for the community, an essential component in an world without the internet. Nicky started another label “Kartoonz” featuring the anthem “2 Degrees”, confirming his status as a central force in the scene.

Unlike many superstars, Nicky still works in his shop and is (still) a promoter of fresh talent and ideas.