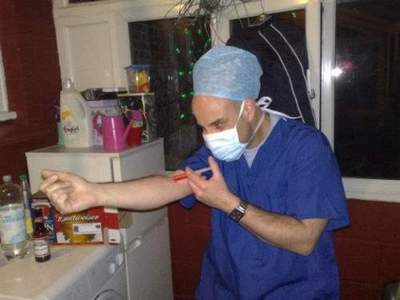 Cor blimey guvnor! I’ve got so much to catch up on that I really don’t know where to start. It’s been a hectic few weeks here at Muck HQ. We’ve had the painters in (that’s not a euphemism) and the studio and club have been given an overhaul. In these situations the norm is “to get a man in”, and although Handy seemed very keen on this idea, and suggested getting a team of men in to get the job done quicker (I’m not sure what he was referring to), there is a recession on, and that means that we have to economise. In real terms that means that we have outsourced our technical help department to Indonesia, and that it was Exotic Technical Boy (ETB) that we hired to give the site a spring clean. I know it’s now summer, but it took ETB several months to make the trip back to the UK as on his wages he had to fly Air Kupu, the only airline in the world where the passengers have to pedal to help take off.

I think you will alll agree that ETB has done a fantastic job, and the site is looking bwad. It’s still a work in progress, so if you’re coming to the club this weekend, please mind the dustsheets and paintpots littering the floor. And if you see an unusually tall,  haggard man, don’t mind him, it’s just ETB slaving away on his 23 hour a day, $1 a month contract that we have tied him to until 2354. I’m talking about the year, not the time later tonight. Golden handcuffs? He’d be lucky, ours are rusty brown clankers which come with their own tetanus jab.

I know that some of you are still asking where I’ve been recently, and the continuing gossip that I have bought a holiday home in Barry Island is divisive, untrue, and to be quite frank, unnecessary. Myself and Mrs Muck have started the Muck Roadshow 2010, and the huge amount of planning and drinking that this involves has kept us tied up for months. As I speak, Mrs Muck is next to me on the sofa tired, sick and groaning softly to sign her up to Dignitas to put her out of her misery. Yep, you got it, it’s not down to a committed, gruelling schedule planning our next trip, but another whiskey marathon in town last night that has come to it’s sorry, inevitable climax. And that’s such a waste of a good word.

Last week we took the Muck Roadshow to the Northern Kingdom, and spent the weekend in Edinburgh. I could spend the next twenty minutes enthusing about how beautiful the city is, but this isn’t a travel guide is it? No, the important news is that myself and Mrs Muck met up with some the Scottish Muck crew, and without wishing to state the obvious, they are mucky as hell and we ‘ad it large!

We met Hooker Barbie, NastyBiscuit, as well as Mr Barbie and some of their crew. We managed to pack in some heavy drinking into just a few hours, and guess what, Mrs Muck was in exactly the same state the following morning as she is now. She’s like the Romanian George Best. Well, her liver is… Actually, come to think of it, I thought she’s been overdoing the fake tan, but her complexion certainly has a yellowish hue to it. Less footballer’s wife and more footballer’s liver.

For legal reasons, we cannot display any photos of last week’s festivities, and my lawyer has advised that… ok, that’s not true. I was too pissed and forgot to take any snaps. Obviously. Suffice to say we had a braw night (my Scottish lessons are coming on well, and I’m working on the accent) and we can’t wait till the next time we can hook up with the NK Crew.

Oh, and I mustn’t forget to mention my first taste of haggis (that’s not a euphemism either). Bloody delicious! Is there anything better than spicy mashed offal, served in a stomach lining for breakfast? I think not. Actually I just suggested to Mrs Muck that it’s probably good for a hangover, and she disappeared into the toilet with haste and hasn’t emerged since. Don’t worry hun, I’m getting you another Scottish hangover cure instead.

I gotta go, there’s whiskey to be bought…