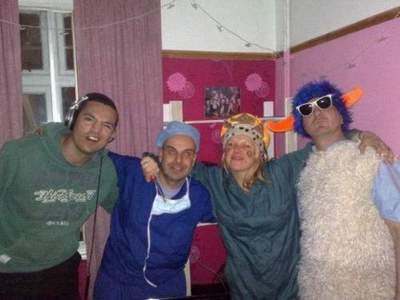 It’s been a great week. The hangover from last weekend finally disappeared sometime on Wednesday afternoon and now I’m looking forward to this one. Weekend, not hangover.

It’s a white weekend here outside the Muck studios, deep and crisp and even. I just love it- so it seems do most people, if all the excited facebook updates in it’s favour are to be believed. We’re all just kids at heart by the looks of it. Which reminds me to buy the ice cream, jelly and balloons for tomorrow night’s studio party. It’s a big ‘un with MC Check here and Sub-Bass making his debut. I think the Muck FM geisha girls are going to have their hands full. Not that I’m bragging or anything.

The funniest thing that’s happened this week is concerning the new Mucky video I posted on YouTube. Whereas the ones from last week have had a few hits, the new Muck Clippers ad has recieved over 700 in three days! Why should this video get so many hits compared to the others? Scul, the actor in the film (he’s certainly luvvy enough to be an actor) think’s it’s all down to him and has gone all Hollywood. Apparently he is unbearable to live with. That’s got nothing to do with the video, he’s just unbearable to live with.

The conclusion I have come to is that some people who are looking for real hair clippers, or stuff about the Los Angeles’ Clippers basketball team have clicked on the Mucky one by mistake.  So, if you are reading this because you discovered us by accident, get in touch. The funniest and most heart-warming stories will get a mention live on air in the newly created “Mucky Moments” slot, read by our special guest presenter, Simon Bates, of “Our Tune” fame. Nino Rota’s theme from Romeo and Juliet will be playing softly in the background throughout, as you’d expect.

I’m off to buy some tunes for tonight’s show, put the bunting up for tomorrow, and pump up a few balloons. Don’t miss the shows, they promise to be the best yet. Don’t forget, we want to hear from you when we’re on air. Your interaction is what makes the shows so much fun, so get on the shoutbox and say hi. It’s like you are here in the studio with us!