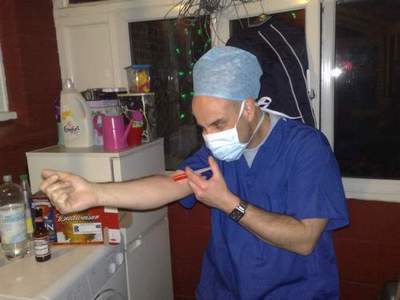 We have a studio full of presents this morning that the team are eagerly ripping open. Somehow Fifi’s bra got ripped open too and there’s pandemonium in the studio now as Handy stripped off and started writhing on the pole. The visiting Warsaw contingent aren’t amused if I’m honest. Yes, Santa came in the night and apparently the geishas did too, judging by the noise last night at the Muck FM Christmas party, and the moist furniture this morning. You should have seen them in their Santa bikinis, dishing out presents to the guests. Yes, that is a euphemism. As you may have realised by now, I love euphemisms. They’re better than sticking your tongue into a warm custard filled doughnut…

Uncle Jamal’s brother, Mustapha is staying with us over Christmas. He’s been offloaded on us because Jamal is currently using his spare room to incubate camel sperm taken from the latest batch of males he’s had shipped over from the Middle East. Business is always brisk for the camel trade just before Christmas, because once the camels have been “milked” they are spiked through the brain, drained (again- this time of blood), then skinned and sent for processing to Bernard Matthews’ farm for processing into Turkey Twizzlers. Bootiful!

So we’ve got Mustapha staying with us until after new year. He is originally from “the deserts of the East” (Mustapha says there are still several fatwas on his head from the 1970s which prevent him from revealing his true identity, and hasn’t read the small print in the back of the Koran to see if their warranties expire or not) but emigrated to Australia over twenty years ago for a more peaceful life. He isn’t a pleasant man, not in character, of which he resembles an Arabic Scrooge, nor in blessed looks. He is a small, hunched man, with a face so terribly leathered that you could saddle a horse with it, and lines that criss cross each other from temple to chin, giving a faint impression of Sid James crossed with Alice Cooper, in turn spliced with Fagin. We call him The Wizened Of Oz.

Mustapha has a Tehran bolthole, a penthouse flat where he escapes the pressures of the Western world (the authorities) and entertains Arabic camel traders, often eagerly assisted by Handy, who has settled nicely into his new job smuggling the camel sperm into the UK to avoid tax restrictions. We don’t ask where he hides it, and he doesn’t tell. He just gets the job done remarkably efficiently though and is working his way up the camel trading world. Or should that be through…? Let’s just say Handy says he is successful in business because of his “hands on” approach, which again is most probably a euphemism. Mustapha hides his illicit satellite dish on the balcony by covering it with a sheet. To passing motorists and bystanders it looks exactly like what it is- a three metre satellite dish with a sheet draped over it, the antenna prodding out from the centre like an over-excited dinner plate, but the secret police don’t seem that bothered. The camel mafia’s tentacles reach far into the offices of some powerful men in the Islamic world, but that’s another story alogether.

Mrs Muck and the geishas have been complaining about the rank smell permeating from Mustapha’s bedroom since he arrived, so I tentatively ventured in there yesterday after he had left to take the train to Luton for a seminar on The Role Of Camels In  Modern Jihad. I pushed the door open cautiously with my finger, and winced as the musty air throughout the rest of the house was replaced by a sharp acrid tang, like vinegar stinging my nose. A smell that reminded me of Jamal when he comes home late at night, drunk and ranting. The light in the centre of the room remained off when I tried the switch, and the curtains were drawn, casting a surreal twilight around the room. Something seemed to be bubbling softly from somewhere towards the middle of the room, in a glooping manner, like a volcanic mud spring. I moved towards the windows to bring some light into the room and felt my left foot sink into something soft, squidgy, warm, and that seemed to be the cause of the smell coursing through the house; corrosive on the nostrils, scarring our brains forever. I took a deep breath and pulled the curtains apart, looked down, and found my foot in the pot that Mustapha uses to brew the camel “milk” into mullahed wine, a warm traditional festive tipple in the cold deserts of the East. Similar to our mulled wine, except blessed by Allah, and made from camel sperm. The floor and my foot were covered in semi fermented camel sperm, and I reached the toilet with seconds to spare before I heaved my mince pies up. Handy told me not to worry, he’d clean up the mess, and came out of Mustapha’s bedroom an hour later, drunk and reeking.

But despite all the normal family irritations that most of us have to endure around this time of the year, everything is good here at Muck HQ. I’m drinking the finest wines known to humanity, the crew are all wasted and we’ve got the trance blaring. Mrs Muck has found a fine bird for us to feast on, and I’m looking forward to that after our roast dinner this afternoon.

Well what do you expect? This is Muck FM after all.